Athens – They were at risk, but the world records remained intact today as Chen Yanqing (China) won the women's 58-kg category in weightlifting at the 2004 Olympic Games. 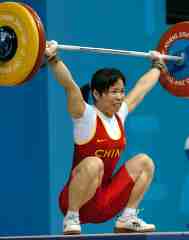 
The ice started to break in this class when the snatches hit 100 kg, and Chen showed her supremacy when she stuck 107.5 for a new Olympic record on her second attempt.  Ri Song Hui (Democratic People's Republic of Korea) missed 107.5 kg on her third attempt, and Chen, in a bid to increase her lead and tie the world record in the snatch, took 110 kg on her third, but she narrowly missed the lift.