What's the story on the so-called "credit card set," "the old IronMind® rules," and the "new IronMind® rules" for certification on the world famous No. 3 and No. 4 Captains of Crush® Grippers? 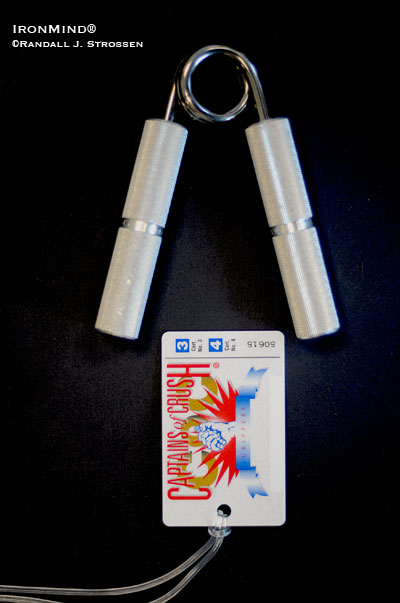 Ready, set, go! Getting certified on the No. 3 or No. 4 Captains of Crush® Grippers requires a legal starting position, not to mention grip strength that's off the charts. IronMind® | Randall J. Strossen photo.

Here's a quick summary that will clear away the confusion and get you on your way to the kind of grip strength and gripper supremacy you would like.

Let's talk sets, as in the starting position for closing a gripper.

As explained in the book Captains of Crush® Grippers: What They Are and How To Close Them, in the very early 1990s, before IronMind® developed Captains of Crush® Grippers, we sold grippers made for us by Warren Tetting - IronMind® had decided to reintroduce the grippers that Warren had made for Peary Rader about 25 years earlier, but had been out of general production for nearly two decades. We always liked these grippers and we thought other people would enjoy them too, so we rolled up our sleeves and started beating the drum, spreading the word about these little wonders. Because some of these grippers were unusually wide, it could be difficult to get your fingers properly wrapped around the handles unless you had a hand the size of King Kong's, so IronMind® advised people to put the gripper in what we called the "sweet spot" before starting their crush. And when IronMind® began certifying people on the No. 3 Captains of Crush® Gripper in 1991, starting with Richard Sorin, this was the way things were done, with gripper placement being as natural and simple as anyone would expect.

Life went on merrily and after a while, a fellow, whom we'll call Bill, was bitten by the gripper bug and he started working the Internet to create a virtual grip world. Bill would go on to have one telephone conversation with Joe Kinney, the first man certified on the fearsome No. 4 Captains of Crush® Gripper, and he wrote an e-book that he claimed was an adaptation of Kinney's training. Joe Kinney, for the public record, was never told that this book was being written and has said that the ideas do not represent his thinking.

Its training programs aside, this e-book taught people what became known as the "deep set," which in straight English meant starting one's crush with a narrower than normal gap in between the gripper handles . . . and this is when the train went off the tracks.

As if by magic, guys instantly "got stronger," as they "closed" grippers that had eluded them only a short time before. To get an idea of how effectively this deep set can work, load up a bar to 100 pounds (45 kg) over your best squat and - using proven spotters or a tested power rack - give it shot in an IPF-approved style. Next, after you've crawled out from under the bar, unload it, put it back in position, reload it, and this time, try to do a quarter squat instead of a legal lift.

Voila! This time you were successful, right?

And this is what Bill's system brought to grippers: just as shortening the stroke would enable you to "break your PR squat by 100 pounds," Bill's system churned out guys who could suddenly "close" a No. 3 Captains of Crush® Gripper. When IronMind® saw what was going on, we thought, "Hey, that's fine if you want to do partial movements, but please don't tell us that this counts for closing a Captains of Crush® Gripper."

IronMind® came up with two possibilities: requiring, minimally, either a one-inch gap at the start or a two-inch gap, and after consulting with a number of people, we decided to give the one-inch gap a try, announcing this in the IronMind® News column.

This announcement was made on February 11, 2003, and after a year of trying this new guideline, seeing that one-inch had rapidly deteriorated into sometimes more like one-half inch and that it really did not represent the grand tradition of these unique grippers, we said, "No more - not with Captains of Crush® Grippers."

We figured that someone else could come along and use maybe a one-half inch start if they'd like to, but there was no reason for IronMind® to cheapen the best-known, most respected feat of grip strength . . . the very thing that ignited the grip fire that burns today. And so in March 2004 IronMind® instituted what has become known as the credit card rule. Here are links to the related stories from the IronMind® News column:

If you've followed this so far, you now understand that the starting position for certification on Captains of Crush® Grippers remained unchanged for 12 years, so if anything qualifies as "the old rules," these are they; and then for one year, the one-inch rule was tried - as a way to disallow the partial movements favored by some members of Bill's board.

However, IronMind® deemed the one-inch rule a failure, with its inconsistent judging and lowered standards - it violated the spirit of this celebrated feat of grip strength and it marginalized grip guys in the process. Thus, IronMind® devised and implemented a new standard - the credit card rule - that at once is historically accurate, manifestly objective, and unquestionably universal. In other words, it preserved the heritage and tradition of the Captains of Crush® Challenge, it used an unwavering method for defining a legal starting position, and the measurement tool was readily available worldwide.

Despite some initial protests, the credit card rule has been a huge success and broadly embraced in the grip world, allowing grip guys to both get stronger and prove their mettle, and lest anyone suggest that it makes things too hard for the new guys, consider the fact that Richard Sorin - the first man ever certified on a No. 3 Captains of Crush® Gripper and the man whose feats of grip strength did more than any others to inspire people to take up the challenge - put his money on the table and re-certified under the current rules, demonstrating a sense of honor equal to his prodigious grip strength:

The credit card rule is elegantly simple, but some people are still confused about how it works, maybe because it's so straightforward: the width of a credit card is the minimum acceptable starting position. Period.

Please note especially that you do not have to start a legal crush at the width of credit card - you can start wider, completely unset, for example, if that's what you prefer. All you have to do is demonstrate that a credit card fits between the bottoms of the handles before you begin your official squeeze.

That's it - simple as pie - and as we have told people since 1990, there really is a secret to closing a No. 3, but it has nothing to do with deep sets or e-books with dubious DNA: you just have to be really strong and squeeze really hard.