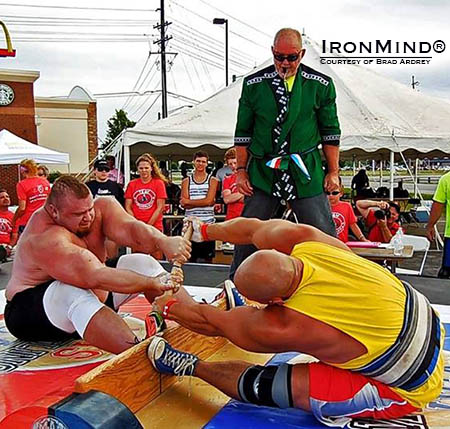 
“The big boys from Ohio came and dominated, but we had courageous performances by John Bailey of Cortez (Florida) and Joshua Stubbs (Indiana).

“The Absolute Men's winner was BIG Phil Brown of Westerville, Ohio, with Brad Ardrey and Steve Slater, respectively, in second and third, both of Lancaster, Ohio.

“9-year olds Maxx Coy and Bret Echelbarger must have wrestled each other more than a dozen times (as well as any other boys willing to take the challenge) between the MAS clinic in the morning and the tournament in the afternoon.  In the official MAS off between the two it was Bret that prevailed.

“In the teen division it was undefeated middle school wrestler, Cody Larkin beating Chad Gifford for the title.