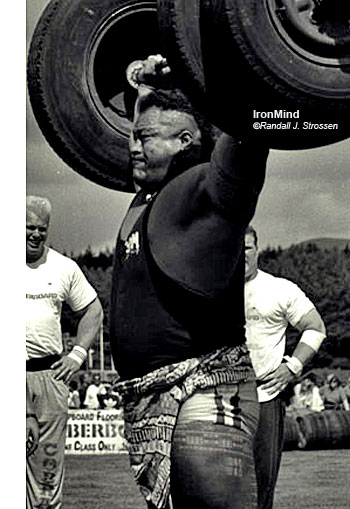 Joe Onasai on the overhead lift at the 1995 World Strength Championships (Callander, Scotland). Talking about colorful competitors, in addition to Joe, that's Nathan Jones on the left and Phil "Stonehenge" Martin on the right. IronMind® | Randall J. Strossen, Ph.D. photo.

When it comes to selling strongman to the public, "you have to be entertaining," to be successful, Magnus Ver said, and with the limited number of personae he sees in strongman, its potential for expansion is limited.

"There is a wide band of people who like strongman," Magnus Ver said, so you need characters within the sport that its audience can identify with.