That legendary arm wrestler John Brzenk won both the 199 -242-pound and +243-pound classes in Boomtown last night isn't surprising, but the king of the table, who sports an an unreal looking forearm, said that he might be taking a shot at getting certified on the No. 3 Captains of Crush® Gripper. 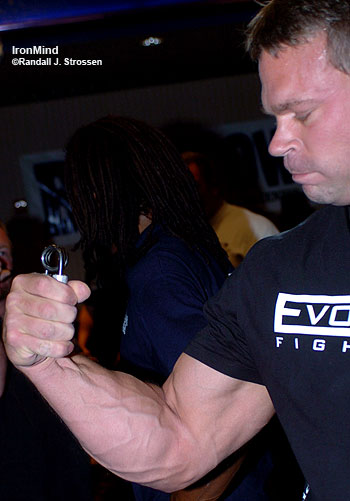 Legendary arm wrestler John Brzenk demonstrates one of his gripper training techniques with a brand new No. 1.5 Captains of Crush® Gripper. Look at the Brzenk forearm, which had just mowed down all comers at the International Tournament of Champions at the Boomtown Casino and Hotel. IronMind® | Randall J. Strossen, Ph.D. photo.

Arm wrestling and grip training go together like ham and eggs, and while John Brzenk has regularly trained on Captains of Crush® Grippers and was one of the first guys to latch onto IM TUG®s, last night he made it clear that he might be ramping up his grip training. John told IronMind®'s Randall Strossen that he has enjoyed meeting more grip guys because so many of them are also interested in arm wrestling and, he said, he might be getting more serious about his own grip training . . . and going for his certification on the No. 3 Captains of Crush® Gripper.

John Brzenk said that one of the things he likes to include as part of his gripper training is a movement that combines an arm wrestling position with closing the gripper - something he demonstrated with a No. 1.5 Captains of Crush® Gripper.

Arm wrestling prowess and grip strength aside, the Breznk lower arm is one of the wonders of the world - train hard and maybe you too will leave Popeye looking frail.