Combine a castle setting with top competitors and it’s no wonder that the Strathmore Highland Games produced record performances and drew several thousand spectators this past weekend—Francis Brebner called the action for IronMind. 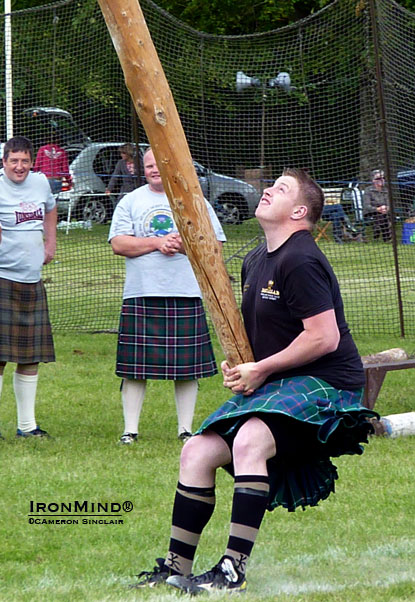 The 2011 Strathmore Highland Games were held this past weekend in the majestic setting of Glamis Castle, attracting more than five thousand spectators who watched top athletes Craig Sinclair and Bruce Robb go head to head, with both men smashing their way into the record books once again.  With a day of sunshine, the Games were opened by the chieftain, Mary, Dowager Countess of Strathmore, who was accompanied by special guest Colonel Alvin Drew of the USA, one of the astronauts who recently returned from the Space Shuttle Discovery’s 39th and final mission.

With a total of eight heavy athletes competing, the first event, the 16-lb. shot got underway.  It was won by Robb with a put of 50’ 9”.  Second place was a very close tussle between Sinclair Patience and Lorne Colthart, with Patience just nudging ahead for the win with 46’ 7”.  Colthart was left in third at 46’ 5”and Bruce Aitken took fourth place with 45’.

The final event, the 56-lb. weight over the bar, showcased the second ground record of the day, with Robb clearing a height of 15’ 3”, smashing his old record of 15’ set in 2004.  Sinclair followed at a height of 15’, while third was a mass tie between Patience, Aitken, Stuart Anderson and Colthart, all clearing 13’ 6”.