“It was a night to remember at the finals in Laugardalshöll stadium with 2000 people going crazy for the strongman contest,” contest organizer Hjalti Arnason told IronMind, as the Jon Pall Sigmarsson Classic title came down to a battle between Brian Shaw and Hafthor Julius Bjornsson. 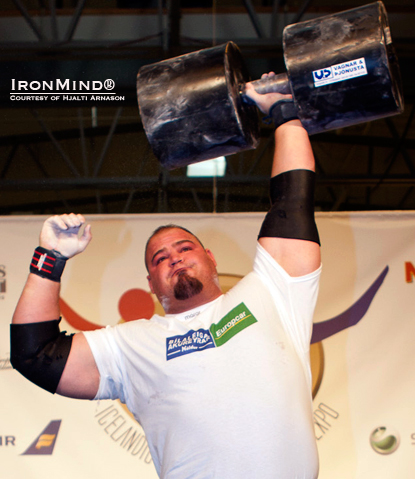 
The final event was the King of Stones and it featured a mix of Atlas and natural stones: 155-kg Atlas, 170-kg Atlas, 177-kg natural, 205-kg Atlas, and 241-kg natural.  Coming into this event, “Hafþór Júlíús had a 0.5-point lead and Brian was second,” Arnason said.  Neither Hafthor nor Brian loaded the final stone, but Brian was faster, so, “ after Brian won the event and he is the first titleholder Jon Pal Sigmarsson Classic.”

“The contest started at Friday with an arm-over-arm event same as in New Zealand 1983 and Haffþór Júlíus Björnsson won that event to prove he is among the best in the world,” Arnason said.

Deadlifting a wagon was next, with Terry Hollands, Mark Felix and Brian Shaw tying with 470 kg.

Brian Shaw won the third event, getting 11 reps with the 90-kg Circus Dumbbell, and then Mark Felix was the only man to finish the Farmer’s Walk.

With such a successful debut, it's no surprise that when asked whether he'd be running this contest again next year, Arnason said, "Absolutely!"