Pasadena, California - Not content to merely break the world record in the IronMind® Apollon's Axle™, Brian Schoonveld opened the World's Strongest Man Super Series qualifier with a bang at the FitExpo yesterday, smashing the world record in a way that left no doubt that he is capable of taking the lift through the 400-pound barrier. 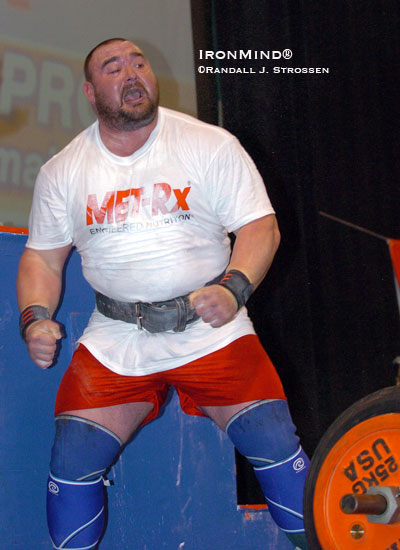 Calling for a blast of crowd support, Brian Schoonveld gets ready to raise things to the rafters in the IronMind Apollon's Axle at the FitExpo yesterday. IronMind® | Randall J. Strossen, Ph.D. photo.

Odd Haugen won the second event of the day, the farmer's walk, which was also marked a moment in strongman history as it was reportedly the first competition with farmer's walk implements exceeding 400 pounds. Rounding out the first day of competition, neo-pro Dave Ostlund won the medley in impressive style.

At the end of the first day of competition, here are the standings: