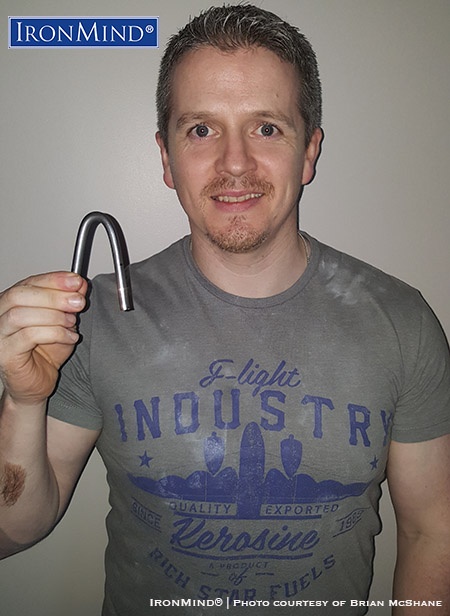 “I am a gym owner and personal trainer. I am extremely interested in everything strength related,” Brian McShane told IronMind. Well, how’s this for another strength world feather in his cap: McShane has just been certified on the IronMind Red Nail, giving himself bragging rights in the world of steel bending. IronMind® | Photo courtesy of Brian McShane

Owner of the BMAC Strength Training gym, in Northern Ireland, Brian McShane, has been certified on the IronMind Red Nail, a benchmark steel bend.

“I am an ex-powerlifter and first put a ‘wobble’ in a Red Nail just 3 months after starting short steel bending and my first full red nail bend was completed 4 months after that,” McShane told IronMind.

“I trained twice a week consistently with overhand bending, until he was bending several reds under certification rules in each workout,” said McShane.

McShane is 38 years old, stands 5’ 7” tall and weighs about  159 pounds, proving that one need not be cast from the mold of a World’s Strongest Man winner to succeed as a steel bender.

Congratulations, Brian, it’s official and your name has been added to the Red Nail Roster, and many thanks to Glenn Ross for serving as the referee on Brian’s official attempt to bend an IronMind Red Nail.