“It was like coming out of a phone booth with an S on my chest,” Bill Kazmaier told IronMind® today, as he was describing one of the duels in his career as a strongman. 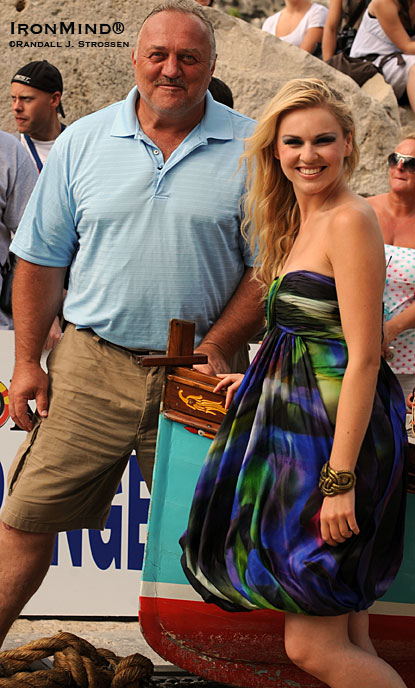 It’s a tough job, but somebody has to do it:  Although he still looks as if he could give a lot of strongmen a run for their money, Bill Kazmaier is on the other side of the microphone these days. At World’s Strongest Man 2009, Bill worked with presenter Zoe Salmon.  IronMind® | Randall J. Strossen photo.


Even if the massively-muscled Bill Kazmaier would have been hard pressed to squeeze into a phone booth, the Superman image is appropriate for the man who 15 years after his last appearance in the World’s Strongest Man contest could show up on the set as a commentator and make competitors fear that he was going to stage a comeback instead.

These days, Bill Kazmaier is an in-demand TV commentator for strongman, and you can see and hear him in action as you watch the 2009 World’s Strongest Man contest.

Who impressed him at the 2009 World’s Strongest Man contest?

With his expert eye, Bill Kazmaier was quick to rattle off his praise for Zydrunas Savickas, Mariusz Pudzianowski, Brian Shaw, and Derek Poundstone - each for a different reason, but if you’re a strongman, when it comes to having Bill Kazmaier sing your praises, all words are golden.