Benedikt Magnusson took another step toward his goal of deadlifting 455 kg when he pulled 426 kg in training on Friday. 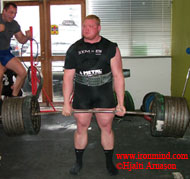 The 426-kg deadlift was witnessed by such notables as Hjalti Arnason and Magnus Ver Magnusson, both of whom immediately vouched for the legitimacy of the lift and Benedikt's ability to pull even more. As amazing as it sounds, Arnason said the 426-kg deadlift was "quite easy," and he said that the lift was properly done, including the use of an IPF-spec bar.

Earlier this year, Benedikt Magnusson pulled 410 kg and then had a close miss with 425 kg at the Icelandic Powerlifting Championships.