Billed as “one of the the premier [strongman] contests for the top amateurs in the country to hold forth against one another,” the third edition of Battle at the Beach is ready to shake things up on Lake Michigan’s Bradford Beach in Milwaukee, Wisconsin on June 22, 2013. 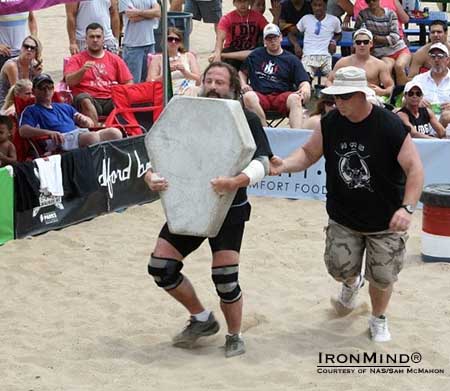 “A tradition of the ‘Beach’ is the Húsafell carry with a 300-pound cement replica of the Husafell stone.  This is done for distance with the loose sand adding a good measure of difficulty to this challenge!”  IronMind® | Photo courtesy of NAS/Sam McMahon.


And don’t think amateur means no money because the prize list at Battle at the Beach is $4,000 which is bigger than some pro contests!

North American Strongman, Bradford Beach and pro strongman Sam McMahon team up to presenting the Battle at the Beach, and this contest has produced some top amateurs, so if you want to see up and coming strongman competitors, or want to prove that you’re one of them, here’s the place to be.

Speaking of professional strongman, according to the press release received by IronMind, “This year is sizing up to be another huge event with 2011 World’s Strongest Man Brian Shaw appearing as a guest.”