In big news from Australia, Bill Lyndon has announced the details of this year’s Australia’s Strongest Man contest—which will also be a World’s Strongest Man qualifier—and the 2012 Giants Live Down Under strongman competition. 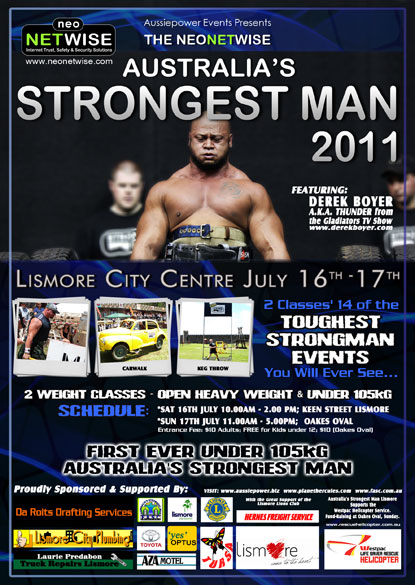 
Here are the details, straight from Bill Lyndon:

This July the 16th and 17th Australia's Strongest Man will take place at Lismore, New South Wales.  This is our fourth annual installment at Lismore and looks set to be a great event.

Some of the events are from the Old School of Strongman.

This year will have a big field of newcomers to strongman in both classes, with mention of new Big Man Daniel Macri at 200 kg 194 cm @ 21 years of age with an impressive 170-kg log in his second year of strongman and with an invitation to top Australian international strongman Warrick Brant, everyone is sure to see the long awaited showdown with the old warhorse Derek Boyer—at
42 years old still roaring and ready to defend His title.  It’s sure to be a Clash of the Titans.

"The fantastic news that goes with this event is that the winner of Australia’s Strongest Man wins direct entry to this years World‘s Strongest Man," Bill Lyndon told IronMind.  "This is a very big move for strongman down under as its recognizes the effort and structure that has been established over the past ten years with The F.A.S.C. (Federation of Australian Strength Competitors) as the official organization for Strongman in Australia."

"It’s good news week Down Under for strongman," continued Lyndon, "because the F.A.S.C./
Aussiepower Events will now produce Giants Live Down Under/The Southern Hemisphere’s Strongest Man in March 2012 in Melbourne with the full support of Giants Live series director Colin Bryce.  This gives athletes from the whole Southern region to participate via a qualifying process in an event that has the top three athletes invited to W.S.M. 2012.

"This gives great opportunities for Athletes from Argentina, New Zealand, South Africa, Australia, Oceania and parts of Asia who have had limited options to compete in the past but now have a platform to launch themselves as strongman athletes.  This has great flow on effects as it encourages and inspires new talent into the sport at all levels which is surely a great future asset to add more diversity and color into World Strongest Man to make it a truly global sporting event."