Hearing that a shortage of travel funds had terminated plans for qualified young Olympic-style weightlifters to compete in major international competitions, California Governor Arnold Schwarzenegger pledged to help raise the necessary money, and last night he did exactly that. 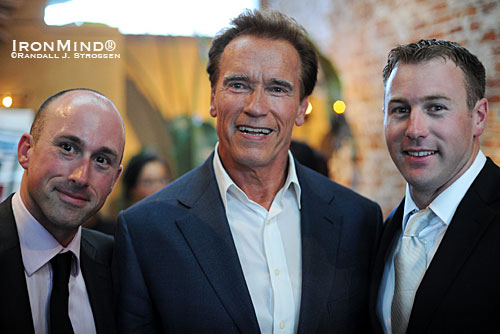 California Governor Arnold Schwarzenegger (center) added his considerable clout to the fundraising efforts of Kevin (left) and Paul Doherty (right), two brothers who have more than gone the extra mile in their schools to build an Olympic-style weightlifting program that uses athletic achievement to create multiple opportunities for their students.   IronMind® | Randall J. Strossen photo.


It began in Columbus, Ohio earlier this year, at the sports festival run by Schwarzenegger and his fitness business partner Jim Lorimer.  Olympic-style weightlifting has been on the program at the  Arnold, as the three-day event is called, since 2003, and this year Sacramento High coach Paul Doherty had a chance to ask the California governor, “What’s it going to take to get you to come to the Kono?”

Doherty was referring to the open weightlifting competition he and his brother have run for five years, named in honor of Tommy Kono, an Olympic gold medalist who also happens to be a Sacramento High alumnus.

The governor asked his aide why the invitation hadn’t been passed along, and said that he would make it there this year.

In fact, as the contest drew near, Schwarzenegger invited Kono to the governor’s office and after visiting, they drove to Sacramento High together.

Besides wowing the Sac High students with his star power, Schwarzenegger explained how, as a teenager, he had been inspired after seeing Tommy Kono in Vienna, Austria - a fateful event because Schwarzenegger said Kono’s performance spurred on his own efforts and what he accomplished as a result led to his being invited to the United States.

The governor also explained to the student-athletes that the lessons they were learning in the gym - working hard, setting goals, achieving progress - would carry over to the rest of their lives.

As an introduction to his program, Coach Paul Doherty handed Governor Schwarzenegger the June 2009  issue of MILO—pointing out the article on Matthias Steiner’s appearance in Columbus, where Schwarzenegger met the young Austrian-turned-German who won a gold medal in weightlifting at the 2008 Olympics.  Doherty then pointed out the article on his school’s weightlifting program, a story not just of achievement on the competition platform, but also the story of kids outperforming their circumstances thanks to an inspired coach making the effort to put together the pieces of the puzzle.

Even as they were driving back to the state capitol, one of the governor’s aides sent Coach Doherty a text message asking him how much money he was requesting.

Last night, at Sacramento’s Lucca Restaurant, Governor Schwarzenegger hosted a reception to benefit the weightlifting program of St. Hope Public Schools, one of which is Sacramento High.  The function was attended by a sample of the political and business elite that is part and parcel of the governor’s network, along with coaches, athletes and supporters from the weightlifting team.  The lifters lifted, the coaches coached and the governor delivered: netting approximately $80,000 for the weightlifting club that the governor explained was in the same position that his was in when he was a 15-year-old kid in Austria, lifting for a club that needed travel money.

“We didn’t need as much, but it was the same thing.  That is why I pledged to always help,” said Schwarzenegger, who said he expects great things from these lifters, calling them the next generation that will bring back gold medals in the sport.