IronMind® got an email from a customer who is something of a gripper fanatic - he said that a No. 3 Captains of Crush® Gripper that he’d recently purchased had “uneven handles . . .,” explaining that  “one handle is placed higher than the other.” 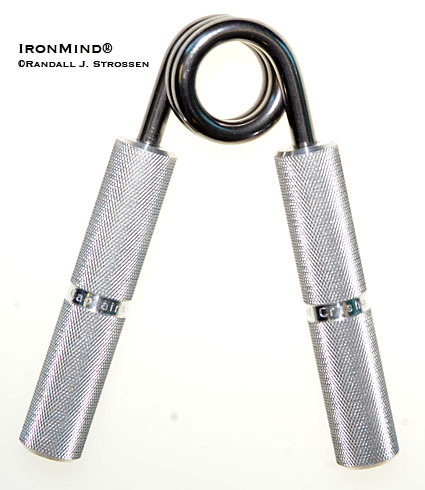 The No. 3 Captains of Crush® Gripper in question: When 2 mm turned into 12.  IronMind® | Randall J. Strossen photo.

This customer said that the handles were not just slightly off, but so far off that he felt the gripper was defective and dysfunctional - incidentally, it’s probably relevant to point out that he isn’t strong enough to close this gripper.

Knowing that anything is possible, IronMind® was quick to acknowledge what he said and suggested that one handle might well be 1 or 2 mm below the other, in which case we would consider this more cosmetic than functional, and also noting that if it were 5 or 10 mm off, then we would consider the gripper to be defective.

The customer was perfectly clear: “It’s definitely not 1 or 2 mm . . . I didn’t measure it but I would say probably half an inch or 12 mm.”  Well, when IronMind® received the gripper, we did measure it, extremely precisely, and the gap was . . . 2 mm.

From the people who brought you the myths about doglegs and gripper seasoning, as well as a misunderstanding of what gripper calibration means, and who tell you it’s okay to shorten the stroke so you can pretend to be stronger than you are, here’s another chapter in gripper mis-guidance: differences, grossly exaggerated, that make no difference.

So, if you want to chat, then type away about inconsequential things like this, and maybe even impress your online cronies as you speak about tiny metric units and decimals carried out to the thousandth’s place, but if you look up from the keyboard, you’ll notice that the strongest guys around aren’t listening . . . in fact, they’re not even there.

Instead, they’re training or doing something else productive - which is why, among other things, they’re stronger than you are.