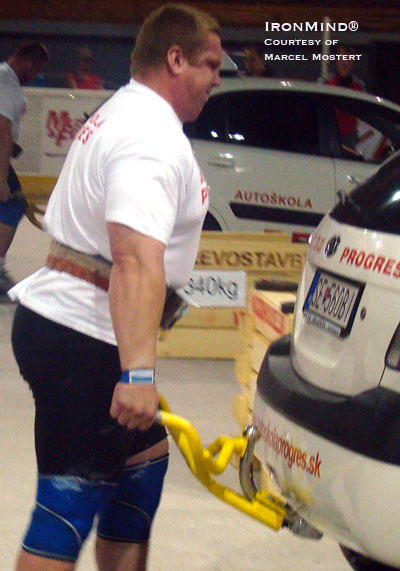 Andrus Murumets motors in the Wheelbarrow, on his way to winning the Strongman Champions League - Slovakia competition.  IronMind® | Photo courtesy of Marcel Mostert.

Here is the full report:


With only one win (on a very heavy truck pull), but with good scores in the other five disciplines, Andrus saved his title.  Terry Hollands was second, ahead of the new Russian athlete, Alexander Klyushev.  Jimmy Laureys, from Belgium, impressed everyone by winning the Atlas stones (up to 190 kg) and winning the farmer’s walk.  He just lost too many points on the Wheelbarrow and Truck Pull, but still finished 6th place overall.

Martin Wildauer, who did so well the first two Strongman Champions League stages, disappointed himself because he made too many mistakes.  But also for him, it’s a learning process: he is just 21 years so I have no worries about him for the future.

It was a nice contest, for the first time in Slovakia with such a great international field.  The organizer, the sponsors and the city were very pleased with the Strongman Champions League and directly signed for an even bigger event next year!  We are also very happy that the athletes liked the show and atmosphere as well.

Coming next weekend, on 14 June, the next stage of the Strongman Champions League will happen in Holland, where a very international field will compete here again, with top hotshots and athletes from all continents!