Tel Aviv—Andrey Demanov (Russia) fought for each lift and reaped the gold medal in the 105-kg category, along with the silver medals in both the snatch and the jerk, at the European Weightlifting Championships. 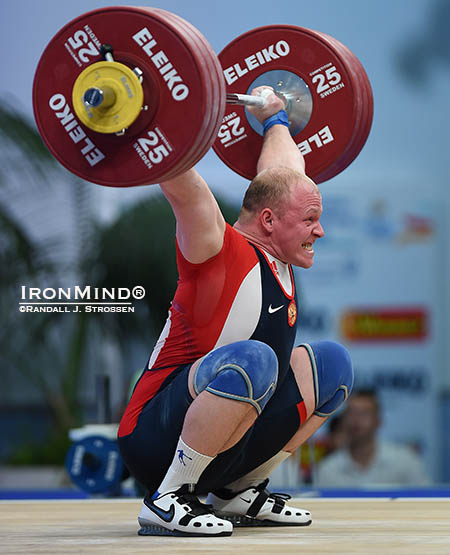 
The return of Andrei Aramnau (Belarus) had lifting fans excited even if he was not expected to approach his best marks.  Aramnau, Demanov and the second Russian lifter in this class, Timur Naniev, started snatching when everyone else was done, and all three nailed 177 kg on their first attempts.  Aramnau had to chase 182 kg on his second attempt and he made a great save to get the lift.  Demanov didn’t have such good luck with the same weight on his second attempt—he had the bar overhead, looking as if he had made the lift, but then lost it as he was recovering.  Naniev made a good second attempt with the same weight, and Demanov made a good lift with 183 kg on his third attempt.  Aramnau, showing what a fluke his last attempt had been, stuck 184 for his third attempt, winning the gold medal in the snatch.

Things unwound for Aramnau in the clean and jerk: he was turned down on his opener (212 kg) for not pausing between the clean and the jerk, came back and made the same weight on his second attempt, and then had 220 kg overhead on his third attempt, but passed out and dropped the bar.

Demanov opened with a good 214 kg lift, and then he locked horns with 221 kg, but he could not get it under control to the referees‘ satisfaction—he struggled step by step to a corner of the platform before dropping the bar.  Undaunted, Demanov came back and made 222 kg on his third attempt—his teammate edged him on bodyweight for the gold medal in the jerk, but Demanov got the gold medal in the total.