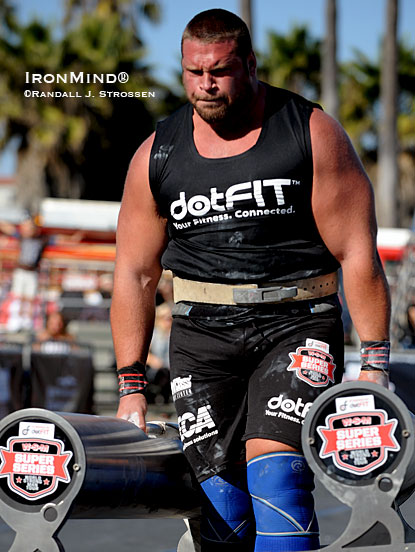 
Instead of resting on their laurels, though, Odd Haugen and FitExpo are up ramping up for 2010.

And with the winner getting a guaranteed invitation to both the 2010 Arnold strongman contest and the 2010 Mohegan Sun Super Series Grand Prix, this is an unprecedented opportunity to prove that you can hang with the big boys.

There is no old-boy system at work here, with insiders working their magic to win invitations for the lucky few.  Instead, Odd Haugen has said that this contest is open to any pro strongman, so a walk-on could walk off with an invitation to strongman contests just one level below the king of the hill, World’s Strongest Man.

Talking about this year’s All-American Strongman Challenge, IronMind® asked Odd Haugen about why the crucifix was changed to the deadlift hold and Haugen explained that because the winner is going to the Arnold, which is known for being heavy, it would be beneficial to make this switch in the interest of better mirroring the sort of demands served up in Columbus, Ohio.

“Can you lift it?,” yours truly asked Haugen.

“I can walk with it,” Haugen replied.

Which is exactly why you want to keep training and why you also want to mark your calendars for the FitExpo.