There is nothing as anticlimactic as a weak performance in the + 105 kg category at a major weightlifting competition, and nothing as good as going put with a blast in this class—led by Aleksei Lovchev’s 205/252 performance, the 2014 European Weightlifting Championships finished with a bang. 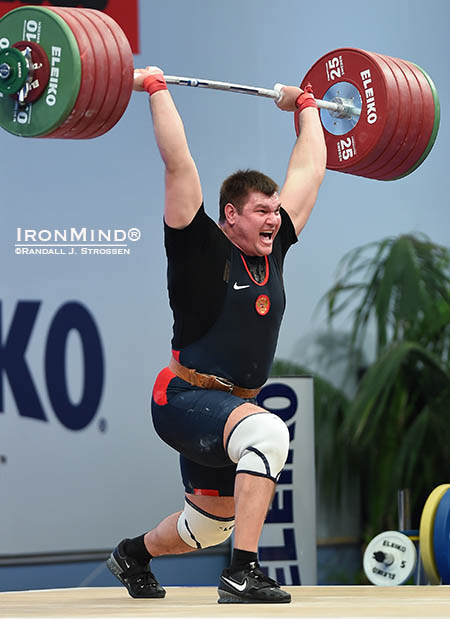 Russia’s Aleksei Lovchev put an exclamation point at the end of the 2014 European Weightlifting Championships: he added this 252-kg clean and jerk to the 205-kg snatch he had already posted to tell the world that he’s a player for top honors in the +105 kg category.  IronMind® | Randall J. Strossen photo


Lovchev (Russia) did 200/230 at last year’s World Weightlifting Championships, not an insignificant performance, but far different from the six-for-six 205/252 results he produced at the 2014 European Weightlifting Championships, and the overall picture is one of growth: the 24-year old lifter is about 5 kg heavier than he was in Wroclaw, and is just now entering what should be the prime years of his weightlifting career, so along with his teammate Ruslan Albegov, and the Iranian Moulaie Bahador, count Lovchev as being in the group of challengers to Behdad Salimi, whose days of coasting to victory in the absence of serious threats are gone.  Now, he will face major competition to retain his his title as strongest man in the world, and one of the primary bids is likely to come from Lovchev.