Almaty—Anyone who couldn’t quite hum the Albanian national anthem by memory got a refresher tonight when 77-kg competitor Daniel Godelli won the gold medal in the snatch and the total at the World Weightlifting Championships. 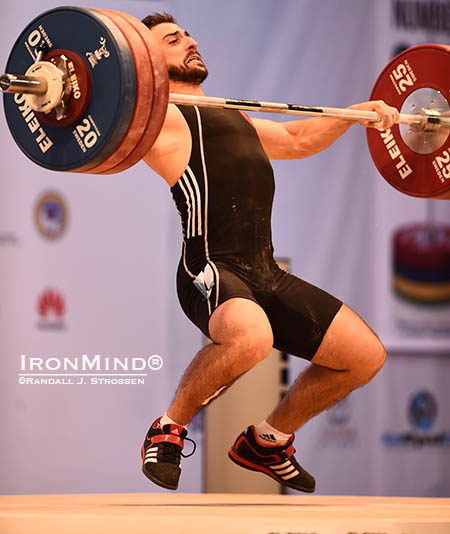 
Godelli and Zhong Guoshun (China) wasted no time locking horns in the battle for top honors as Godelli ran out a string of three good snatches to end up with 171 kg, edging Zhong on body weight. Kim Kwang Song (North Korea) only made one good attempt, 163 kg, but it was good enough for the bronze medal.

Kim’s fortunes were reversed in the clean and jerk, where he made three good lifts, and his 200-kg third attempt success won him the gold medal in the jerk. When Kim finished, Song and Godelli each had one attempt left and Zhong used his for a crack at 201 kg—eyeing gold medal position in the jerk and in the total, but after getting the bar overhead, he could not fix it and it came crashing down.

With everyone else done, the gold medal in the snatch and total in his pocket, Godelli called for 211 kg on his third attempt—which would break the world record in the clean and jerk as well in the total.

Godelli cleaned the weight easily, but missed the jerk—this was a big night for him, as he notched a 20-kg improvement in his total from this year’s European Weightlifting Championships, and it also suggested that Oleg Perepetchenov’s nearly ancient 210-kg world record in the clean and jerk for this category might be within reach.