Bucharest - The final outcome was in balance until the last lift, but when the dust settled Arakel Mirzoyan (Armenia) was king of the hill in the 69-kg category at the European Weightlifting Championships. 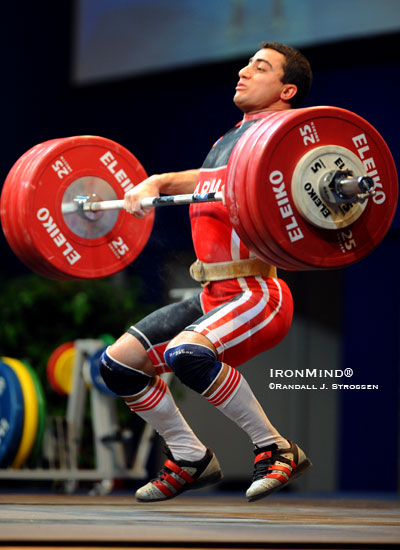 Arakel Mirzoyan pulls himself under 185 kg at the European Weightlifting Championships. Mrozoyan won the gold medals in the snatch and in the total, along with the silver medal in the clean and jerk. IronMind® | Randall J. Strossen photo.


Mirzoyan got off to a good start, snatching 145 kg and then 151 kg, before missing 154 kg. The 151 kg would give him the gold medal in the snatch, but with Ninel Miculescu (Romania) making 151 and three lifters finishing with 147 kg, the snatch had demonstrated how competitive this class would be.

Miculescu opened with 173 kg in the clean and jerk, for a good lift, but then he missed 178 kg, unable to stand up with the weight on his second attempt; and after struggling up with it on his third attempt, he missed the jerk. This ended Miculescu's chances of a top place in either the jerk or the total.

Of the other leaders coming into the clean and jerk, Afgan Byramov (Azerbaijan) was the next to open, making a good attempt with 175 kg and then Vladislav Lukanin (Russia) made 177 on his first attempt. Mirzoyan, who is coached by his father, Oksen, opened with 180 kg on his first attempt, moving into gold medal position in the jerk and in the total - he cleaned the weight easily, barely got set for the jerk, and then rammed the bar overhead. Venceslas Dabaya (France) also made his opener, 181 kg, which moved past Mirzoyan in the jerk; Dabaya's clean looked pretty effortless and after standing up with the bar, he repositioned his hands for the very wide grip he uses for the jerk.

Mirzoyan took 185 on his second attempt, looking to regain the lead in both the jerk and the total, but he missed the jerk badly - once again, he moved from the clean to the jerk very quickly. Also with his eye on the lead, Dabaya followed with a very easy clean with the same weight, but he, too, missed the jerk. Mirzoyan repeated with 185, taking a bit more time to get set for the jerk, and he made a good lift. Bayramov called for 186 on his third attempt, but he never racked the weight. Chasing the gold in the jerk and the silver in the total, Dabaya made a very nice lift with 186 on his third attempt, but things still weren't over, as Lukanin called for the 190 kg that would give him the gold in the jerk and in the total - it was a big call, but the lift was not to be, as Lukanin retreated with less than a deadlift.