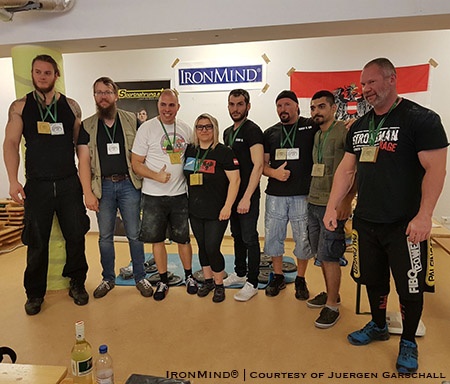 Guergen Garschall organized the 2018 Austrian Armlifting and Strict Curl Championships in Vienna, last weekend, so competitors could test their grip strength as well as how much they could curl, and has reported contest highlights to IronMind.

“We have seen amazing performances from Manuel Singer (on the left of the group photo) with new Austrian Record in the Strict Curl with 70 kg (he placed second because of the bodyweight) and 40 kg of Patricia Luxner (middle of the photo), also a new Austrian record.

“The winners of the weight categories at the Strict Curl Championships were:

“And last but not least I would like to thank the sponsors of the Competitions: IronMind, Sportnahrung and Weingut Bohrn,” said Juergen Garschall.