It’s set for the Los Angeles FitExpo, January 29  - 30, a grip contest with $5,000 in cash prizes to the top three in what is being billed as “an open challenge to all grip masters and ‘wannabe’ grip masters.” 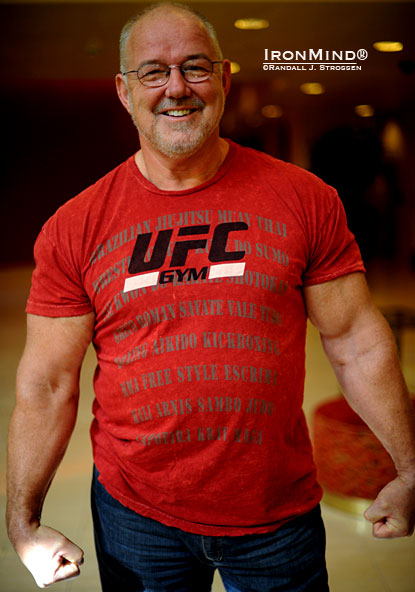 Odd Haugen, a familiar name in strongman circles is is also known for having a really good grip.  IronMind® | ©Randall J. Strossen photo.

Here are the provisional schedule, events and rules.

Mighty Mitts Power Medley: “The athletes (reverse order of overall standing) will attempt to lift and load each object to an 8” platform single-handedly. The objects must be LIFTED to the platform without the use of the other arm/hand, but athletes may use legs to push objects onto the platform. The objects: a Standard Barbell 45-lb. plate each by the hub; a York 50-lb ‘Blob;’ a 2” vertical grip bar with ~210 lb; an Anvil (~175lb) by the horn; a 172-lb. Thomas Inch Replica dumbbell; a 181-lb. Circus Dumbbell (3” diameter grip); and the 228-lb. Millennium Dumbbell.    “As a tie-breaker, after lifting as many objects as possible, do double-handed reps on the IronMind Go-Really Grip Marchine™ (~165 lb.).  The most objects successfully lifted to the platform, and the most successful reps on the gripper if the numbers of objects lifted are equal, wins the medley.  No grip aids other than chalk allowed.”

The Viking Fishing Pole Wrist Roller Challenge: “The athletes (reverse order of overall standing) will attempt to hoist a giant fishing pole (actually a telephone pole) using an IronMind Wrist-Roller set-up.  The athlete to raise the ‘fish out of water’ in the least amount of time wins. Unsuccessful ‘fishing’ will be rewarded in distance raised.  No grip aids other than chalk allowed. 60 seconds time limit.”

Double-Overhand Deadlift (last man standing): “The athletes(reverse order of overall standing) will each attempt to dead lift the IronMind Apollon Axle® loaded with standard plates, starting weight 180 kg/396 lb. and increasing with each attempt till there is ONE MAN STANDING.  Time starts when Axle is loaded, and athletes have 30 seconds to commence the lift.  No grip aids other than chalk allowed.”

Hercules (Deadlift) Hold: “The athlete (reverse order of overall standing) will attempt to lift and hold for as long as possible a 320 kg/705 lb. Giant Frame.  The grip is normal sized and not knurled.  No grip aids other than chalk allowed.”

Thomas Inch Dumbbell Deadlift: The athletes competing in pairs will each attempt to single-handedly dead lift a Thomas Inch Replica dumbbell (172lb) for as many times as possible within in a 90-second time limit.”