Pacific Weightlifting Association president Butch Curry announced that, with Kevin Doherty's help, the 2006 Northern California Open will be held at Lincoln High School on May 21. 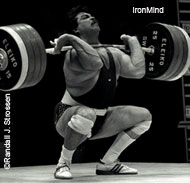 He's from Salinas, but Mario Martinez moved to Northern California to fully develop as a weightlifter - Mario is the last American man to medal in weightlifting at the Olympics. Who's next? IronMind® | Randall J. Strossen, Ph.D. photo.

The advantage of attending even a local weightlifting meet in Northern California is that you never know who might show up: the area has produced many of the top American weightlifters and there are more on their way, so even if you don't plan to lift, stop by and say hi to a past or future Olympian.