Odd Haugen told IronMind that he has closed out the entries for the 2006 FitExpo Pro Strongman Challenge and his field is going to contain at least six competitors with World's Strongest Man experience. 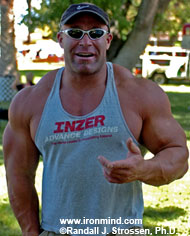 Making everyone else look bad and creating shade at the same time: Jon Andersen's traps, shoulders, lats and arms can cast quite a shadow. IronMind® | Randall J. Strossen, Ph.D. photo.

Scheduled to run all three days of the 2006 FitExpo, in Pasadena, California, the competition will begin on Friday March 17 and finish on Sunday March 18, with seven events deciding who will get what from the $10,000 prize list.