Columbus, Ohio - Kicking off the first of the three chairperson meetings that lead up to the 2006 Arnold Fitness Weekend, Jim Lorimer said that even though over 120,000 people attended the 2005 weekend, projections are for a much larger crowd in 2006. 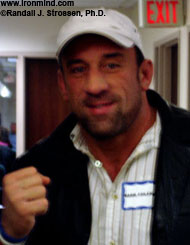 The man who began this massive enterprise 31 years ago, in partnership with Arnold Schwarzenegger, modestly attributed its success "to the great effort of the people in this room," but when you listened to the chairpersons report on their areas, one of the common themes was a sense of gratitude to Jim Lorimer for giving them an opportunity to be a part of what just might be the world's largest multi-sport expo.

To handle the growth of the 2006 event, the merely 1,700,000 square foot Greater Columbus Convention Center wasn't large enough, so the Lorimer–Schwarzenegger extravaganza will include figure skating, hockey skills and martials arts at the Nationwide Arena across the street. Fighting - as in both boxing and mixed martial arts - will be in that new venue and a marquee event will be the Friday Night Fights.

Calling it "strength heaven," Lorimer said the Arnold will once again include arm wrestling, strongman, powerlifting, bench pressing, and weightlifting. Running through the 2005 highlights for each of these, Lorimer praised the upper-body strength of the arm wrestlers, and he cited the high numbers posted in the WPO meet. The Arnold Strongman contest quickly established itself as one of the biggest contests on the professional strongman circuit and Lorimer said that in 2006 Zydrunas Savickas, Vasyl Virastiuk, Brian Siders and Mikhail Koklyaev will be among those vying for prizes that include a Hummer. Turning to weightlifting, Lorimer explained that in addition to the meet run by the Columbus Weightlifting Club, IronMind®'s Randall Strossen had brought over the two Chinese men who were Olympic champions in Athens for a special exhibition and that Strossen, with Lorimer's support, was developing a similar program for 2006.

March 3 - 5 are the dates for the 2006 Arnold Fitness Expo and tickets are available through Ticketmaster.