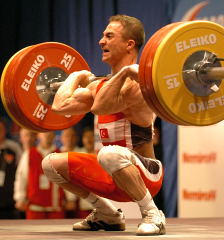 Artuc Sedat (Turkey) hits the bottom with his 155-kg clean and jerk, on his way to a gold medal performance in the 56-kg category at the 2004 European Weightlifting Championships (Kiev, Ukraine). IronMind® | Randall J. Strossen, Ph.D. photo.

With its feet reportedly held to the fire in terms of having to produce medals at the 2004 Olympics in order to retain its funding, the German Weightlifting Federation came up empty-handed when its superstar, Ronny Weller, had to withdraw from the competition after suffering a shoulder injury, and a lack of funding is said to have produced the change of venue. The 2005 European Weightlifting Championships is the first major continental championships in the beginning of the next Olympic cycle, and both lifters and coaches are already drawing a bead on Beijing, so this contest could well provide an early glimpse of the some of the top lifters we will see at the 2008 Olympics.