The qualifying round for the 2005 MET-Rx World's Strongest Man contest will be much like what was used previous to the 2004 competition. 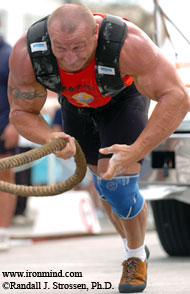 Two-time World's Strongest Man winner Mariusz Pudzianowski will be one of the favorites in this year's event. Pudzianowski looked formidable throughout the WSM Super Series this year, not only qualifying for WSM 2005, but also emerging as the 2005 WSM Super Series overall champion. IronMind® | Randall J. Strossen, Ph.D. photo.

The 2005 MET-Rx World's Strongest Man qualifiers will divide the 25 athletes into five groups of five, and the top two competitors from each group will go forward to the finals. The qualifiers begin on September 27 in Chengdu, China.