Beijing - Eye-catching performances are to be expected from Chinese weightlifters and now Long Quingquan is an Olympic gold medalist at 17, handily winning the 56-kg category and breaking two Junior world records in the process. 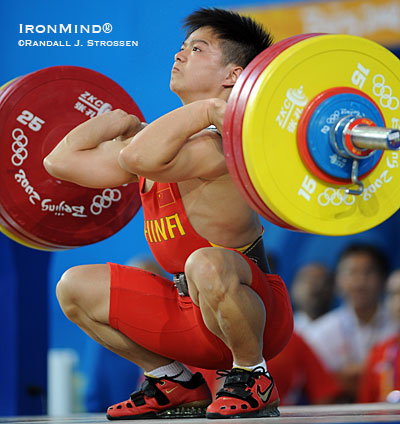 It was the only lift he missed all night: After cleaning this 164 kg on his third attempt, Long Qingquan punched the jerk up and over the back of his head, but no matter, the 17-year-old won the 56-kg category at the Olympics today. IronMind® | Randall J. Strossen, Ph.D. photo.

Long Quingquan looked as if he were loaded for bear as he ripped through three good snatches: 125, 130 and 132 kg, gaining a 2-kilo advantage over podium favorite Hoang Anh Tuan (Vietnam), plus he was the lighter man, and to frost the cake, his 132-kg snatch was a new junior world record. If his lifting wasn't enough to remind you of three-time Olympic gold medalist Halil Mutlu, Long also seems to have a penchant for celebrating successful lifts with his tongue dangling out of his mouth.

Not content to let Long be the only teenage star tonight, 19-year-old Eko Irawan (Indonesia) had also snatched 130 kg, and he was lighter than Hoang Anh Tuan.

Of the leaders after the snatch, Irawan opened first in the clean and jerk, making a nice 152-kg lift. Long Quinguan made a very strong 155 kg on his opener, and Hoang Anh Tuan also made a good lift with the same weight on his first attempt.

Hoang Anh Tuan has a pattern of going through the motions of the lift before he steps up to the bar, and he does the same thing after the lift when he misses, much to the crowd's amusement tonight. Cha Kum Choi (North Korea), who had been attacking the bar with the ferocity of a tiger all night, tried the same weight, but was blown out the back by the jerk. Hoang Anh Tuan repeated with 160 kg on his third attempt and he made the lift, fighting through a tough jerk.

Cuba's Sergio Alvarez took 161 kg on his second attempt, but missed the jerk, and Long Quingquan took 164 kg on his third attempt, looking to add a second junior world record in the total to the evening's haul, but he shot the bar up and over the back of his head. Alvarez racked 166 kg on his third attempt, trying to move from sixth place to fourth, but he couldn't stand up with the weight.

It was quite a class, and at 23 years old, silver medalist Hoang Anh Tuan was practically a senior citizen on the medal stand.