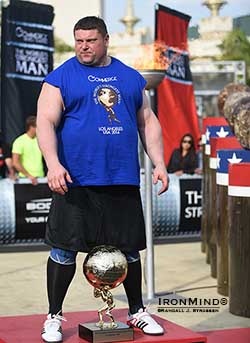 Giants Live director Colin Bryce confirmed that “The top three fom Norrkopping, Sweden this past Saturday have guaranteed a place at WSM 2015.” 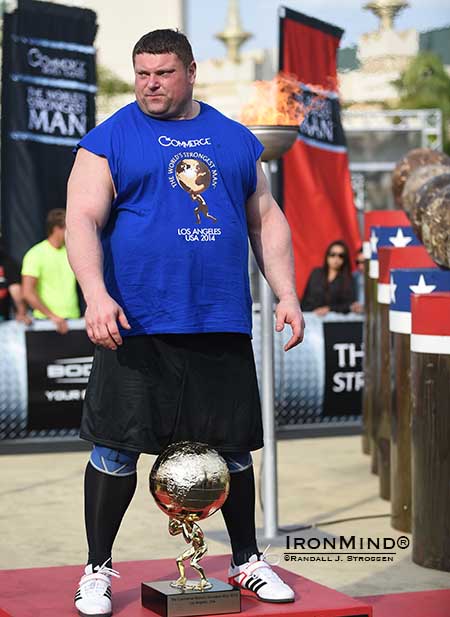 World's Strongest Man 2014 came down to the final event and when the dust settled, Zydrunas Savickas had bagged his fourth WSM title. Now strongman fans are speculating about who will win the 2015 edition of WSM: Brian Shaw, Johannes Årsjö and Martin Forsmark made the podium at Giants Live–Sweden, ensuring themselves an invitation to WSM 2015, the first step toward winning the highly-coveted title. IronMind® | Randall J. Strossen photo


“It was a good battle between Johannes Arsjo and Brian Shaw,” said Bryce.

“Despite a hand injury Johannes won the opening event the Farmers Walk. Brian then won three in a row to get on top. However, a blistering run in the stones from Arsjo and several other men finishing all five meant Brian Shaw had to complete all 5 stones to win at the end. Brian showed why he has won the King of the Stones title at WSM [World’s Strongest Man] before by popping them all on at a trot despite a mild groin strain.

“Johannes went Monday for a knee operation to clean up his joint and is hoping to be back for WSM in the new year.

“Adam Bishop - a former rugby player from England - had a great battle with the local hero and policeman, Martin Forsmark for third place. In the end the big Swede held his nerve in the stones and finished just ahead of the former Under 105kg champion of the UK.

“The next Giants Live is at the Doncaster Dome on February 14th and it will decide 'Britain's Strongest Man' as well as have a host of internationalists including Nick Best of the USA.

“The opening event is max log and the current Britain's Strongest Man, Eddie Hall, is looking to demolish the British log record of 200kg and take it much  closer to the 220kg mark - something he is getting close to in training. Tickets available at www.the-dome.co.uk.”