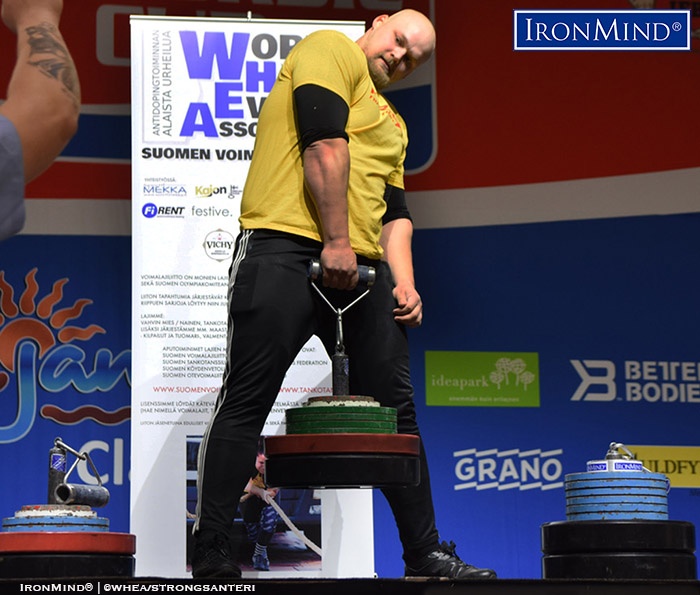 The Rolling Thunder gave birth to armlifting and while the 1-rep max lift will always be a cornerstone of grip strength contests, a medley can mix things up—as shown in the WHEA World Grip Championships.

Contest organizer (and masters competitor) Jyrki Rantanen told IronMind, “The WHEA World Grip Championships [were characterized by] a smooth competition with plenty of audience cheering for the athletes at the Nordic Fitness Expo.

“The Rolling Thunder medley [was very popular], and Harri Tolonen edged out Jesse Pynnönen, who was the overall winner.

“Along with the Rolling Thunder medley, the events included the IronMind Hub, (where Harri Tolonen tried new world record of 46 kg, but this time it was not successful), the IronMind Little Big Horn (Pynnönen 103.75kg), CoC (Captains of Crush) Silver Bullet Hold (three competitors got time with the Captains of Crush No. 4 gripper) and a thick bar deadlift.

“In the competition, IronMind rules were in intact, of course, so, for example, all implements were wiped off after each attempt and we had two referees (Lucas Lindberg and Jouni Mähönen).

“WHEA continues to showcase some of the world’s top grip-strength competitors and we have some exciting plans for 2020,” Rantanen said. “So train hard and jump into one of our contests.”