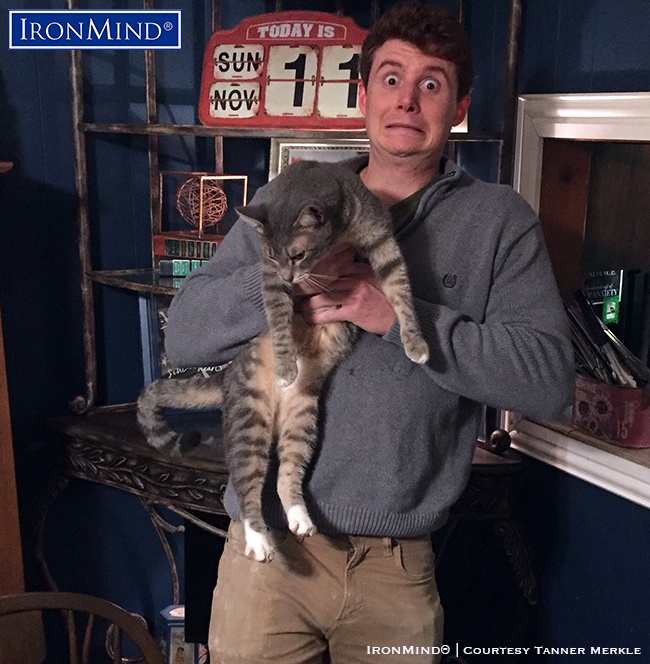 anner Merkle has just been certified on the Captains of Crush No. 3 gripper, and from the sound of things, that’s just the tip of iceberg in terms of what he can do in the world of grip strength. IronMind® | Courtesy of Tanner Merkle

Congratulations to Tanner Merkle—who has just been certified on the Captains of Crush No. 3 gripper, proving his world class grip strength.

Tanner (Red Nail ’17) works as a respiratory therapist, which come in handy because his grip strength could knock the wind out of innocent bystanders. Consider what his referee, Tommy Jennings, Jr. (CoC3 ’13, Red Nail ’13), reported to IronMind:

“Tanner was successful on his [Captains of Crush] No. 3 attempt!

“And not only did he demonstrate mastery of the [CoC] No. 3 on what seemed like a whim during our grip training session, but he also, hours after training at the gym with Eric, Adam and I, lifted and farmers walked 2 Thomas Inch DB replicas! At his body weight, that is quite incredible to say the least, but it doesn't stop there . . . this guy even did a 1-arm pinch grip pull-up on a pinch block during our meet-up! In-fucking-credible.”

A thirteen-year veteran of competitive rock climbing, Tanner Merkle told IronMind that a knee injury forced him to back off from climbing and that’s when he discovered grip strength contests, where his credits include winning the 83-kg title at the 2017 King Kong International Championships.

Tanner said that he's been training grip strength for about 1-1/2 years, and that he could close a Captains of Crush 2.5 gripper the first time he tried. Currently, “Three to fours days a week,” he does, “general grip training, mostly thick bar and pinch. Gripper work is about 4 singles, 3 doubles, slowing backing off on difficulty.

Tanner stand 6 feet tall and weighs 180 lb. and especially given what he's already accomplished and that he's 26 years old, keep your eye on him down the road.