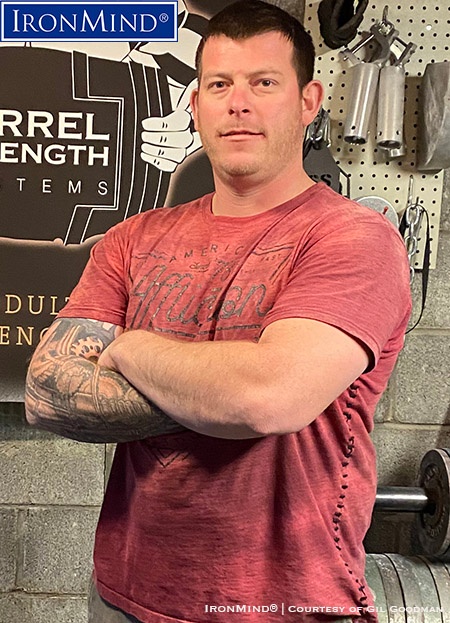 “After bending a 60d nail and some of his own Red Nails that he brought to warm up, we set up cameras, opened the package [from IronMind], and Stan proceeded to melt it in 7.5 seconds from the first hit to the end of the last hit.

“He bent the other two, just for fun, and we then played around with some of the classic grip feats in my home gym, most of them being completely new to Stan.

“He easily lifted a 50-lb. Blob several times, lifted a 150-lb. inch replica, performed a 45 plate hub clap (a plate hub transfer with a clap in the middle of it, only two people have done this before), and lifted my 128-lb. anvil.

“It was quite a pleasure meeting such a nice and strong fellow in Middle Tennessee, and always good to see J.T. I am happy to say that Stan successfully completed the Red Nail Challenge under all certification rules. Please see the attached photos for his picture and the referee form,” said Gil.

“Justin (JT) Straussner told me about you guys and the [IronMind] Blue Nail. Justin has has helped me a lot along the way, which has been a big help,” Stan told IronMind.

“I own a semi truck and that is my day to day job. I do welding/fabrication as well. Justin Straussner got me into bending and I like it very much and plan to grow with grip/bending. Big thanks to Gil Goodman, for adjudicating the attempt, and allowing us to bend steel and try his grip implements while we where in Nashville TN!

"I have three boys and a wife, Kayla. Life is good. Want to work my way up on grippers and certify on the [Captains of Crush] No. 3 next,” Stan said.

Congratulations, Stan—it’s official: you have have been certified on the IronMind Red Nail and your name has been added to the Red Nail Roster.

Many thanks to Gil Goodman for refereeing Stan’s official attempt and also to JT Straussner, an ambassador in the bending community.