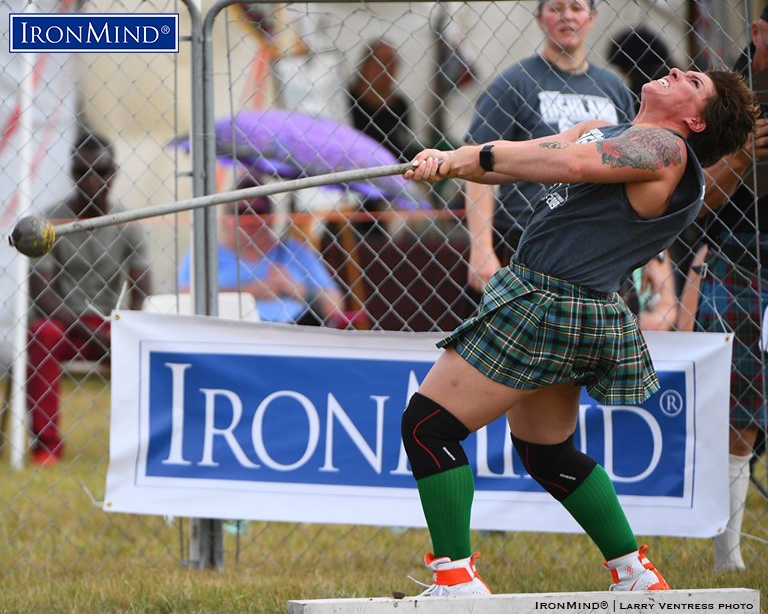 After a 10-games run-up, the finals of the IHGF All-American Highland Games were hosted by the Great Plains Renaissance Festival (Wichita, Kansas).

This year’s finals of the IHGF All-American Highland Games men’s and women’s qualifying series, held over ten qualifying games across America, was a huge success. One men’s and one women’s athlete from each of the qualifying games met in the finals hosted by the Great Plains Renaissance Festival in Wichita, Kansas, with the title holder in the men’s A group earning a place at the 2020 IHGF Amateur World Highland Games Championships in Fefor, Norway and the winner of the women’s A group division receiving a scholarship of $1,000.

Men’s Finals
This year’s men’s finals of the IHGF All-American Highland Games Championships featured seven athletes: Sean Burns, Eddie Johnson, Kyle McKelvey, John Van Beuren, Chad Thompson, Jeremiah Giambartolomei, and Ryan Huddleston. One of the best to date, the championships created an electric atmosphere from start to finish, with athletes battling in every event to a climactic finish, all under perfect skies.

A new ground record highlighted the 22-lb. Braemar stone as McKelvey and Van Beuren went all out, with Van Beuren overtaking McKelvey in the final round with 45’ 3”, breaking the old ground record of 43’ 6”. In a close second and also surpassing the ground record, McKelvey did 44’ 10”, followed by Burns, with a very respectable putt of 39’ 8”.

With the lead changing hands every round in the 28-lb. weight for distance, Van Beuren notched the victory with a distance of 76’ 4”. Just inches behind were McKelvey and Burns, who tied at 75’ 8”.

With two scoring events to go, McKelvey had a 3-point advantage over Van Beuren.

Burns and Van Beuren thrilled the spectators in the 56-lb. weight over bar, reaching world-class heights of 17’, with Burns taking the victory on countback. McKelvey was third at 16’.

This year championships was fantastic, to say the least, and the two rookies, McKelvey and Van Beuren, along with established athlete Burns, all of whom come from a track and field background, put up an amazing performance throughout the competition. McKelvey won the honors and will advance to the 2020 IHGF Amateur World Highland Games Championships in Fefor, Norway.

Greene and Hapner went all out from the first round in the 16-lb. Braemar stone, with Greene claiming the victory with a massive putt of 36’ 11’. Second was Hapner at 35’ 11” and third Sanou at 33’.

The 9-lb. open stone again was close between Greene and Hapner as both produced class putts over 45’ with Greene pulling off another win at 47’11” to Hapner’s second-place 46’ 6”. Sanou again was third at 43’ 3”.

The top three put on a great show in the 14-lb. weight for distance. After an early lead, Greene was overtaken by Hapner with a terrific throw of 82’ for the win. In close second was Sanou at 79’ 7” and in third Greene at 78’ 6’.

All eyes were on world recordholder Greene in the 28-lb. weight over bar, but she opted to come in at 16’ and could not clear the bar: she had plenty height, but her throws were straight up and down in front of the bar. The win was claimed by Kuestner at 16’ on countback over Hapner. Sanou made 15’.

Congratulations to overall winner Denise Greene, who received a $1,000 scholarship!

The IHGF would like to thank director Richard Cathey of the Great Plains Renaissance Festival for hosting the IHGF All-American Highland Games Championships, and especially the athletic directors Dave and Gunner Glasgow and Larry and Terri Ventress, for making it all possible.

Next up are the Men’s IHGF World Strength Games Challenge, the Women’s IHGF All-American Strength Games, and the IHGF California Celtic Classic Highland Games at the San Clemente  Carnival Colossal, 12–13 October at the Vista Hermosa Sports Park, with competitions starting at 1 pm each day, free entry and parking, and all filmed for TV and social media.