IHGF CEO Francis Brebner has filed a report on the USA vs. Canada Highland Games Team Championships, which produced some impressive throws. 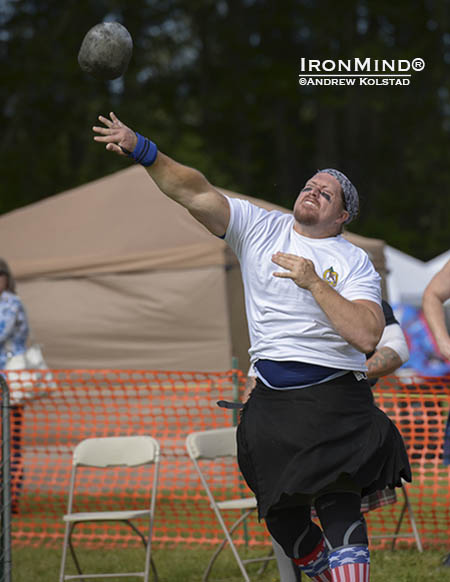 McCallum, who has been very consistent in his performance so far this season, producing some very impressive throws, is someone we are going to hear more of in the future, I predict.  He has been tipped as a favorite to clinch the IHGF World Amateur Highland Games Championships title, which will take place in Norway later this month.

The competition got under way with the 16-lb. open stone, and as expected, the rising sensation McCallum took the first win with a noble putt of 48’ 10”, which also set a new ground record.  Bell placed second with 47’ 3” and Knebel third at 46’ 11”.

McCallum, now filled with assurance, locked up the weight-for-distance with a talented throw of 80’ 7” for his third straight victory and yet another field record.  Second place went to Stewart with 79’ 10” and third to Kasson with 79’ 2”.

In the 56-lb. weight-for-distance, Stewart affirmed the win, but only after a close tussle with McCallum, with a distance of 44’ 4” to establish a new field record.  McCallum was second at 41’ and Kasson third with 40’ 8”.

In the 20-lb. sheaf toss, Stewart reached the winning height of 30’ in his specialized event, with another field record to his credit.  Second equal were Kasson and Goldthorp at 27’.

The caber, at 21’ long with no taper and 118 lb., proved somewhat difficult with no successful turns.  Stewart managed a best of 80 degrees, with a tie for second place between McCallum and Hadley with 75 degrees.

The final event, the 56-lb. weight-over-bar, was won by Kasson with a height of 16’.  Second was a three-way tie between Knebel, McCallum and Stewart, who all cleared 15’.

Athletic directors for the games, Jay “Big Daddy” O’Neill and Bret “Hoss” Lathrop, were delighted with the team championships and the overall level of throwing and hope to build the Highland Games as well as championships games for the future in Bellingham, Washington.