Busan, Korea - +105-kg competitors Dimitris Papageridis (Greece) and David Kadanets (Russia) were both perfect in the snatches, only Papageridis ended his string at 182 kg to edge Kadanets by one kg. 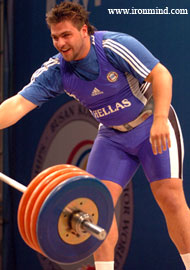 Papageridis hit two clean and jerks, 211 and 215, for the gold medal in the total, Kadanets made his opener, 210, missed the jerk on his second attempt, 215, and then ran out of time on his third attempt, 218. Tzetvetan Dimitrov (Bulgaria) got the bronze in the total with 170/206.