Dongguan, China – With no Chinese competitors starting in the men’s 69-kg weightlifting category at the Asian Games tonight, it looked as if any of several different weightlifters could pocket the gold medal—setting the stage for an exciting contest.

the title looked capable of leaving with several weightlifters. 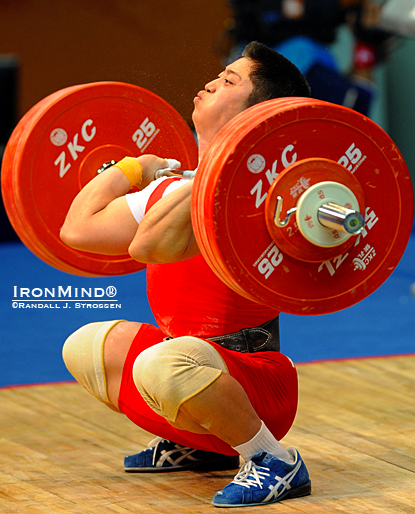 North Korea’s Kim Kum Sok, proving to be steady and strong, uncorked the clean and jerks it took to win the 69-kg category at the Asian Games tonight.  IronMind® | Randall J. Strossen photo.


Either of the two Iranian teammates looked to be on the short list for leaving the Dongguang Gymnasium with a new golden necklace, especially as they both had an attempt left in the snatch after all the other lifters were done.   Seyed Panzvan, the lighter of the pair, went first and he sent 149 kg sailing over his head.  Morteza Rezaeian followed with 150 kg, appeared to have made a good lift, but then he lost it as he was recovering—he left no doubt about his bitter disappointment, and this miss would loom large as the competition unfolded.

Whatever excitement was lacking in the snatches was more than made up for in the clean and jerk as attempt after attempt stood to move a lifter up several places in the last minutes of the contest.

Kim opened with 175 kg—he pulls slowly, although he moves under the bar quite fast, and then he wastes no time blasting the jerk overhead.  And just how cool is he?  Standing over the bar with about 30 seconds left, he walked off the platform, chalked up, nonchalantly returned to the bar and made a good lift.

Panzvan, who was tied with Rezaein, took 176 kg on his second attempt but missed the jerk badly, repeated with the weight and this time he lost the jerk behind.  Rezaein made a good third attempt with 177 kg, and now things were going to get interesting in a hurry.

Triyato (Indonesia) came out for 180 kg on his second attempt looking very confident and it was for good reason as he had a solid success with the lift.  Ravi Kumar Katulu (India), who had struggled in the snatches (missing 140 twice before making 141 on his third attempt) made 180 kg look surprisingly easy on his second attempt, only to lose the jerk as he was recovering from the split.  Unfortunately, he repeated this sequence on his third attempt—what a frustrating night this must have been for him.

Won Jeonsik (Korea), lying in sixth and going for second (!), took 181 kg on his second attempt, but he got bowled over backwards when he racked the bar.  As the barbell rolled over his throat and head the crowd let out a collective groan in horror, probably expecting to see Won decapitated in the process, but, of course, given the clearance provided by the plates, he was fine.

So much for drama of the non-scoring type, because next up was Kim, who called for 181 kg in a bid for the gold medal.  It was another slow pull, easy recovery, quick jerk and a good lift.

Maybe to show that he was unfazed by the events of his second attempt, Won repeated the entire sequence on his third attempt and the fans, proving themselves to be quick learners, barely emitted a sound this time.

Triyato, not to be denied the gold medal if he could help it, called for 182 kg on his third attempt and after making what looked like a good lift, he dropped the jerk behind at the last second.  Kim, gold secured, called for 182 on his third attempt, but after gripping the bar and giving a small tug, he walked off smiling—he was, after all, the new Asian Games 69-kg champion.