Jumping the Feet Too Wide

It's funny how a person will instinctively pick up a barbell incorrectly the first time.  If you ask someone to power clean a barbell from the floor and it is his first time or he hasn't been properly taught, the common errors you'll see are:  yanking the bar with bent arms, rounding the back and then catching the bar with the elbows down and the bar below the clavicles and deltoids, hips coming forward, and jumping the feet out too wide.  I also see this flawed technique used a lot by football players and throwers (shot put, discus, javelin, and hammer).

I want to discuss the phenomenon of jumping the feet wide, as this seems to be the flaw that is the hardest to correct.  The correct foot movement for the power clean, as well as the power snatch, is for the feet to start at hip width for the pull and then slide or jump out to about shoulder width when catching or receiving the bar on the clavicles and deltoids for the clean, or overhead with arms locked out in the snatch and in a quarter squat.

The first technique I use to correct too-wide jumpers is to have them do power cleans and snatches from their thighs and do the lift without moving the feet at all, not even rising up on the toes.  We start with an empty bar and do triples until they start moving their feet.  We then do several sets there so the lifters get a feel for it.  The weight will be much less than they are capable of lifting, but that is okay, they must learn what it feels like.  Depending on the individual, you might do this drill for several workouts.  Once you feel the lifter has no foot movement at all, you can then let him rise up on his toes, which will allow him to lift more weight. 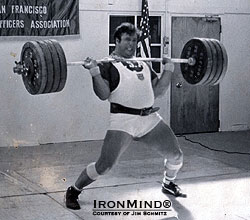 Bruce Wilhelm's PR power clean of 210 kg.  Jim Schmitz calls it "an ugly lift, but it was strong and impressive."  IronMind | Photo courtesy of Jim Schmitz.

When you feel the up-on-toes move is good, you can progress to allowing the feet to slide or jump out by drilling which feet go from the hip-width pulling position to the shoulder-width catching position.  Again, don't neglect the quarter or full squat position, where the hips go back for balance, while concentrating on the feet.

Another technique I use to teach the proper foot movement and placement is to have the lifter get set in his pulling-from-the-floor position.  With chalk I outline the front of his shoes on the platform.  I have the lifter do a lift moving the feet to the receiving position and I outline the front part of his shoes again.  I have the lifter do his reps and sets with whatever weights he is lifting and after each rep we check his foot placement.  Sometimes it takes only a few workouts for a lifter to get consistent with his foot placement, and sometimes it is an ongoing issue that he has to really concentrate on through his whole lifting career.

Another technique I use is to outline the front part of a lifter's shoes, and then have him do the first rep from the thighs without moving his feet and the second rep from his knees, allowing him to move his feet out just a little bit.  For his third and final rep, he resets his feet to the pulling position, lifts from the floor, and moves his feet to the receiving position.  That's what I call "hang power clean, no foot movement," "power clean from knees, slight foot movement," and "power clean from floor, full foot movement."  That is 1 set of 3 reps.  You might go to 5 to 6 sets of 3 reps total, with light to medium weights.  You also do this same drill for snatches.

The side benefits of the above three methods are that they force you to finish your pull, as a lot of "feet too wide" lifters usually cut their pull as they try to get under the bar.  They also teach you to get the hips in proper position behind and not under your torso.

Once you think you have your foot movement and placement established correctly, you can go heavy.  There may be some breakdown with maximum weights from time to time, but keep plugging away on proper foot movement and it will get better.  Bruce Wilhelm had the "jumping feet too wide" problem and I thought we had corrected it, but one day he wanted to set a PR power clean and he reverted back to all the flaws he ever had—feet too wide, elbows down, hips forward—but he did do a 210-kg (462-lb.) power clean and he jerked it.  It was an ugly lift, but it was strong and impressive.