On January 26, Ausssiepower Events’ Bill Lyndon is launching “a new strongman circuit [in a] series [that] will profile the strongest men from the Southern Hemisphere.” 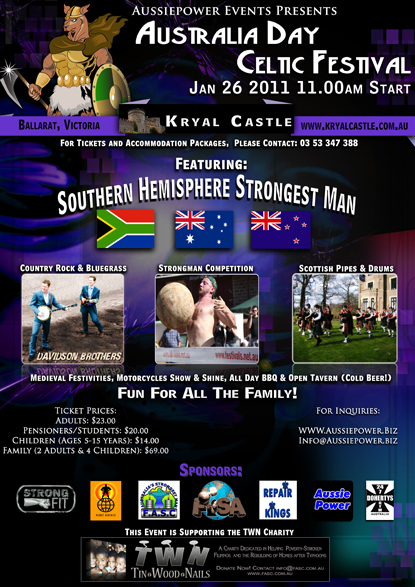 Like strongman and want to go south for the winter?  Maybe head to Australia.  IronMind® | Image courtesy of Aussiepower.


Initially, Lyndon said, the focus will be on athletes drawn from Australia, South Africa and New Zealand, but invitations to athletes “from the northern side of the world” will follow as the new organization gets more established.

Called “Clash of the Titans,” the series will kick off at Kryal Castle; the second event with be at FitX.  Lyndon said, “The events being modeled similar to the Arnold short-course style and in addition [will include] three outdoor events like Car Walk, Boat Pull, Stretch Hummer Pull, Timber Carry …all the old school events.”

“This will be followed by a June series event and a major event planned for China in October,” said Lyndon, as he works to expand strongman opportunities for athletes in the Southern hemisphere.