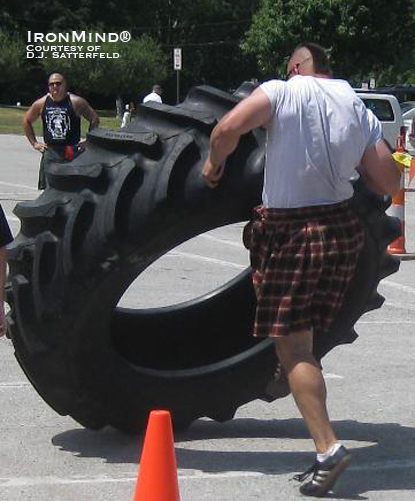 
Summing things up, Satterfeld said, “It was a very warm, sunny day and the competitors put in some stellar performances,” as he filed this report with IronMind®.

In the closest battle of the day, the heavyweight division, Charles Kasson of Nebraska  took the crown. “Charles and Matt Vincent (2009 NAHA Heavyweight Champion) battled it out all day, with each winning  three events and each getting three 2nds, so it came down to bodyweight and Charles weighed 3 lb. less, claiming the victory.

This competition was once again a benefit for Camp CoHoLo, a local cancer camp for children ages 6-17.  We were fortunate enough to raise over $2,200 bringing our four-year total to $10,000 in donations to the camp.  The camp is run on donations only.

A highlight of the day was 10-year-old Megan McConnaughey.  Megan is a camper from the camp and is fighting a serious battle of cancer right now.  “We were honored to have Megan attend the competition for a short while and say a few words to thank everyone and talk about the camp. It was a very humbling moment for all in attendance.

NAHA will have a full write-up, pics and scores posted on their website later this week.